at the Max Planck Institute for Biogeochemistry

Note: the group was terminated in 2019. The pages are not updated any more.

The station is hosted by the ESA Ariane Tracking station on Ascension Island (7.9° S, 14.3° E) in the South Atlantic Ocean. Operation started in May 2012.

Inside the laboratory container is a Fourier-Transform Spectrometer (FTS). A solar tracker (front, center) guides sunlight into the FTS which is then spectrally analyzed over a wide spectral range with very high resolution. The concentration of carbon dioxide, methane and a number of other greenhouse gases can be derived from these spectra. The measurements are especially useful as a reference for satellite observations of greenhouse gases. 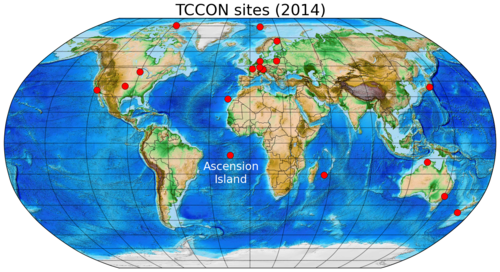 Currently, Ascension Island is the only equatorial site in the Total Carbon Column Observing Network (TCCON). 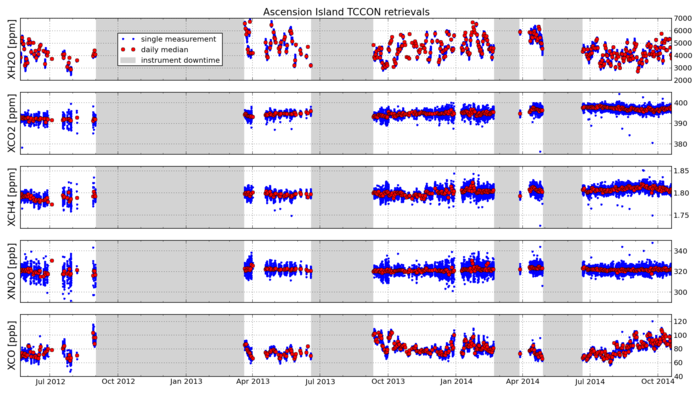 A TCCON station measures a number of atmospheric trace gases at once. The measurements are column-averaged dry-air mole fractions. Unlike in-situ measurements, they cover the whole atmosphere and not just the surface. While CO2 changes only slowly over time, CH4 shows some seasonal changes. The strongest changes are in CO when air from biomass burning events in Africa is transported over the station at several km altitude.

During the first 1.5 years of operation, the station suffered badly from the rough environment on Ascension Island. Salt corrosion destroyed delicate optical components and other equipment which disrupted the measurements. Most of these problems were solved by September 2013.